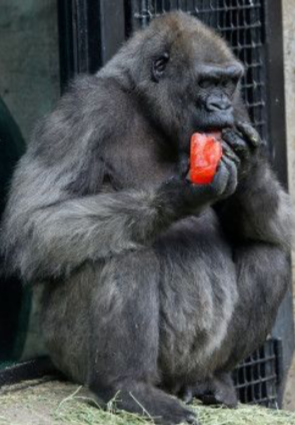 On Saturday November 30, Gigi, a 47 year old Western Lowland gorilla was euthanized due to a check-up turning up several serious health conditions. A statement from the zoo claims the gorillas condition had been deteriorating for several days, with reduced mobility and appetite. Gigi was a part of the Franklin Park Zoo for nearly 40 years, and will be missed dearly by employees and guests alike. Gigi was among the oldest gorillas living in a zoo in the United States. Gigi was also quite busy in her earlier years of life, “ born at the Cincinnati Zoo on July 13, 1972, and was moved to Stone Zoo in 1980. She gave birth to two males before being moved to the Franklin Park Zoo’s new Tropical Forest Pavilion in 1989”.

Employees at the zoo had an especially close relationship with her, due to working together all the time. She underwent a surgery some time ago that greatly improved her quality of life for the rest of her time. They say she took a grandmother-type role for other gorillas she wasn’t even related to, taking care of two sisters who were born in the past 10 years at the same zoo. Gigi was also usually seen carrying around her stuffed animal purple monkey. During the last 7 months of her time at Franklin Park, she was under staff care for a while.