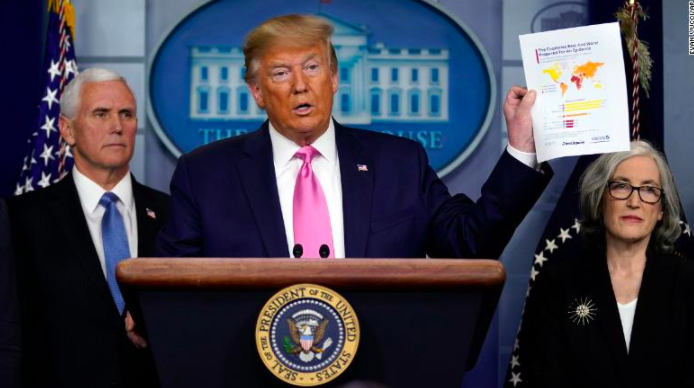 I am sure you are familiar with Trump’s blatant disregard for the severity of COVID-19. Not following basic protocol, holding rallies that aren’t properly socially distanced, holding rallies where no attendees are wearing masks, making fun of Vice President Biden for taking proper protocol, etc.

Trump had tested positive for COVID-19 after attending the Presidential debate and after having held a rally. This sparked an uproar in the media. There are many people who mock Trump for supposedly catching COVID -19, since he previously referred to the virus as a “hoax”. While some mock the President others are scared for the future of our country.

October 9th, Trump claims he is in better shape COVID-19 wise now, however some doctors who have been treating COVID-19 patients claim his worse symptoms have yet to come. Trump also spoke out in a tweet saying to “not be afraid of COVID-19”. This tweet ignited anger in the public due to people losing loved ones to this virus and due to him having the best health care specialists in the world working for him currently to keep his health intact. Even with backlash and warnings from professional health care, President Trump still says he will be able to “return to public engagements” on Saturday.

October 12th, Trump claims he tested negative for COVID-19, so in celebration he held a campaign rally. At this rally there was an enormous lack of masks and social distancing at the event. Even Vice President Biden stepped in to express his thoughts, proclaiming how he thinks Trump’s actions are “reckless”. Trump’s response to all this was in a tweet saying, “So Biden is coughing and hacking and playing “fingers” with his mask, all over the place, and the Fake News doesn’t want to even think about discussing it. “Journalism” has reached the all time low in history…”

The media gets day to day new information on Trump’s current COVID-19 status, however a surplus amount of people speculate if the President faked it due to his minority in votes, in order to spark sympathy and pity votes. In recent tweets people have expressed their thoughts on the situation. One tweet saying, “Here’s how I think they pulled off the #TrumpCovidHoax. They told all involved that it was a drill- they would do everything exactly as if Trump and others tested positive. All have signed NDA and cannot speak due to national security. Then, they used it all as a campaign stunt”. It will be interesting to see if there are any more developments.