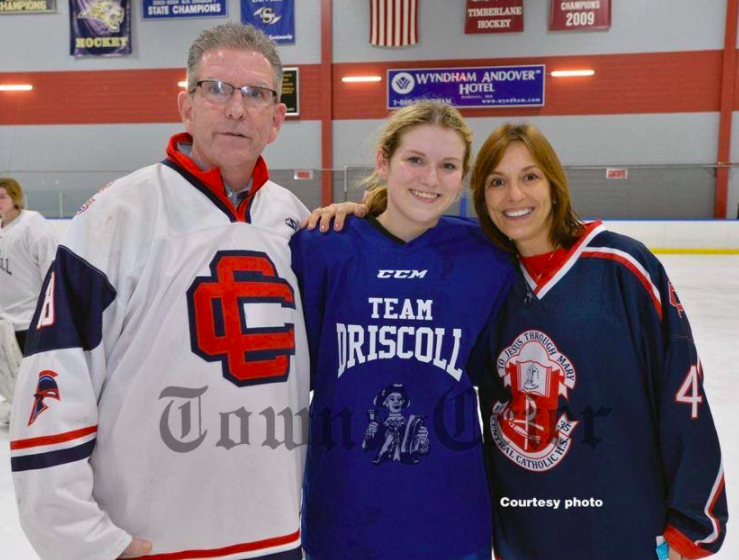 The previous year they had also held an event similar to this to raise awareness and help fund for the loss of an amazing person. At this event the stands were filled with students and parents from both schools coming together to support the Driscoll family. Lisa Driscoll and Dennis Driscoll were welcomed onto the ice to give a tear-jerking speech and to participate in a puck drop between their daughter Jessica Driscoll, Tewksbury/Methuen player and a close contact of Ryan’s, Julia Storniolo, Central Catholic player.

Coaches, captains, and boosters from both the Tewksbury/Methuen and Central Catholic girls teams were determining a gift they could present to the Driscoll family with the Covid-19 restrictions and not a lot of time to work with. Finally, we came up with the decision that the best gift we could come up with was gathering videos of all of Ryan’s closest friends, teammates, coaches, and classmates talking about memories they’ve had of Ryan and saying a few kind words.

In order to make this happen we had to contact a close friend of the Driscoll Family and also a best friend and teammate of Ryan’s. This friend further helped gather these videos by contacting his old teammates and classmates. Our team has a history of being very close and having strong dynamic and chemistry, causing this to be a very hard secret to keep. Although gathering these videos in such a small time was strenuous, keeping Jess from finding out about them was even more demanding. While I am a friend of the Driscoll family, I also have practice with Jess 5-6 days out of the week. The coaches and I tried to keep this idea in a small group of people until it is closer to the date, just to keep word from spreading like wildfire.

The impact Ryan had on both the Tewksbury and Central Catholic community is almost breathtaking. Whilst putting this video together my eyes started to water from all the love I felt through the screen for such an amazing life.