Lack of Diversity in Public Education 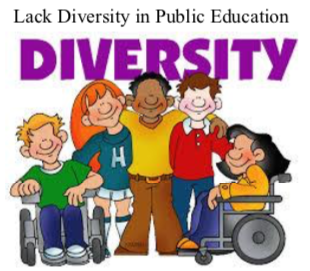 It is no phenomenon that school districts nationwide experience an absence of cultural diversity regarding students and faculty. An appropriate school environment would be a place in which students and staff unite to form in depth relationships and bonds with one another. However this is not a new issue. In fact, racial segregation within public schools did not begin to decline until recently. Regulations were not altered until the late 60s and early 70s.

It does not take a genius to realize that exposing children to great amounts of diversity at a young age will increase levels in maturity, as well as expand their perception. Students with different racial upbringings offer unique insights and perspectives. Recommending different beliefs, benefiting all the children, and new bonds being formed. It escalates creativity, supporting problem solving, and improvements in cultural awareness.

A recent study held by the National Center for Education Statistics stated, “the percentage of public school students who were Hispanic increased from 16 to 27 percent.”. Now that the minority population has begun to rise, more children will profit from this positive influence.

Although there are numerous benefits regarding the intergeneration of all students, regardless of their racial background, many people are opposed to this idea. There is a great deal of people that feel as though incorporating larger groups of diversity within public education will cause the quality of education and teaching to plummet. It will be more difficult to teach students concepts that may be harder to comprehend. Additional issues may consist of language barriers, which prohibit efficient communication. Educators will need to work twice as hard to eliminate these obstacles.

And even so, “an integrated school leads to better academic performance for students of color without affecting white students performance”, which was discussed in a similar article written by The Washington Post. Minorities are the main victims of this diversity block, making it complicated to succeed in the future.